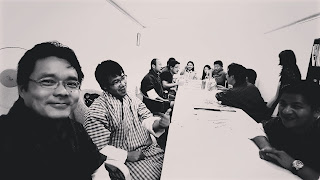 Thimphu, 14 May 2016 - The only group that I meet these days happens to be the Community of Bhutanese Bloggers (CBB) - an informal group started by Passu, Rekha and Ngawang. The group can counts on over 100 registered members and meets at least 4 times a year.

The group has grand ambitions. And lack of funds has not deterred them from organising 3 successful conferences (at shoe string budget) and 5 bloggers meet - at no cost. The second conference in Paro drew as many as 75 participants. Some of them drove from as far as Trongsa and Tsirang and paid for their own expenses. That's a far cry from the government conferences where people have to be paid handsome per diem to just show their faces - and often nothing come out of them.

Throughout the evening I was entertained and educated by Sonam Tshering - a biochemist-turned-lawyer and by Nima, another lawyer at the newly established Bhutan National Law Institute - and Tharchen, who has gathered over 30 unemployed youth and trained them in filmmaking and animation to create iBest. Of course, the host of the evening, Passu, took the opportunity to present his new NGO, The Bhutan Toilet Organisation. And how else but by giving almost live demonstration of how we Bhutanese should use a toilet. A teacher by profession, Passu gave up a prestigious position at the Royal Academy to "teach" the larger Bhutanese population on how to properly carry out the most basic human activity. His initiative has drawn lots of public attention - not only those who need to relieve themselves but also from mainstream media and public. His volunteers are there at every large gatherings to provide the basic facility.

Then I met our youngest blogger, Tashi Wangmo, 20, who is majoring in psychology at the University of Southern Florida. She has been blogging since her early teens. It was also nice to catch up with our only parliamentarian in the group, Sangay Khandu, who most ably represents Bhutan's remotest district of Gasa in the country's highest legislative body.

As I walked home, past midnight, in the light drizzle (my car is down these days) I couldn't help but smile and feel a great sense of hope for my country.

While 'hydropower" is flaunted as the "only" resource by our leaders, I believe that a greater human resource is actually getting flushed down in the same beautiful and bountiful country of ours.

I hope that our energetic prime minister, Dasho Tshering Tobgay, comes to the next bloggers meet to feel what I am feeling.

Posted by Dorji Wangchuk at 8:57 AM