Hail to the Chief

The appointment of Kuensel’s Dasho Kinley Dorji as the secretary of ministry of information comes at a very crucial time for the Bhutanese media.  When we are all trying to understand what 'free media' is all about.  When the media itself is trying to understand itself.  And when petty quarrels between the media and the regulators, and also between the media themselves, are becoming a norm.  Everyone agrees that Bhutanese media is at an infant stage.  But the new era of democratic self–governance will require the media to quickly grow into adulthood.  The challenge for everyone therefore is to see that media gets a fair chance to make mistakes, experiment, grow and move on.  Hence at the helm of the development of media in Bhutan, we need people who understand media in the first place.

Chief Kinley (as he is popularly known in the media circle) comes with a long experience of seeing the modern Bhutanese media take root, grow and transform itself several times.  In fact he has been very much a part of it and his contribution to the development of mass media in Bhutan has earned him the red scarf from His Majesty the Fourth King.  Kuensel will lose some leadership, no doubt, but hopefully his appointment as the secretary of the ministry of information will drive the Bhutanese media forward - boldly into the future and take its rightful place as the Forth Estate of democratic governance.

Here we go round the mulberry bush 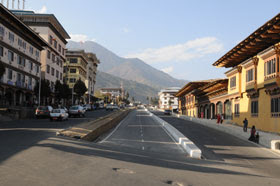 History, they say, repeats itself. So does life too. ‘Here we go round the mulberry bush’ was a game I played as a child with other children holding hands and going round and round and jumping in a circle. As I move into my mid-life with no trace of childhood habits whatsoever, I find myself playing the game all over again. But this time there is no hand to hold or circlings to be done. You are on the steering of your car and going round and round of Thimphu.

Well, you guessed it right. I am referring at the way we are shepherded around Thimphu by our traffic system. The way the traffic flow has been designed (or ill-designed) we are pushed into unnecessary traffic jams and into burning the pricy petrol. A friend of mine told me that the country that doesn’t produce any oil has the largest number of one-way traffic roads and a terrible traffic management system. I couldn’t agree with him more.

From my office in Hongkong market, as you drive down from Swiss Bakery I have noticed someone has put boulders to push us towards Chorten. I don’t know if this iss even a work of a government agency.  Definitely I can say it is a bad joke and behind every bad joke there is someone playing God. (The boulders have now been removed.  I wonder if it was because of this article).
Then there is that horrible wall that extends the entire stretch of the new boulevard.  If you come down the Chang Gangkha School, you have to drive all the way to Chubachu even if you are headed for the Swimming Pool.  If people have not felt stupid building it, I feel stupid driving it!  This wall even reminds me of the Berlin Wall that divided East and West Berlin. Physical wall, some say, develops into mental wall over a period of time.  There is a theory that East Berliners have still not recovered from the mental wall they built during the Cold War period.  So, soon we will have East and West Thimphu. I fall on West Thimphu and you? May be people who planned it never heard a saying – build bridges not walls. The walling mania of course is quite contagious. The Changlam has just been walled making us go and take a round near BNB to get into the Changlam Plaza. Then the other one is the BOD channels. Coming into Thimphu and after crossing the infamous saddle bridge, you are pushed into the heart of city, and into a sure jam, even if your destination is the Memorial Chorten or you are carrying an injured man to the hospital - for which you want to shoot straight up towards the Memorial Chorten.

But there is one road I could never figure out how to use it or who uses it. The middle road that runs along Norzin Lam and the Taj Hotel (in the picture). Or was it built to be a symbolic reminder of the famous middle-path we Bhutanese never follow anyway?

I used to love playing ‘mulberry bush’. But when you are way past your times, it is an outright waste of time, energy and fuel. Anyone who does something on this issue will get a standing ovation from me on this blog, I promise.
Posted by Dorji Wangchuk at 4:57 PM 5 comments: