Getting to Bangkok and Beyond

Few days back I saw a facebook post by my brother, Karma Wangchuk (he works as a DEO) of teachers risking their lives to come for a workshop in Zhemgang "while others in Thimphu are fed up of going to Bangkok".

Ever since I have been thinking as to how one could make it to Bangkok and beyond for courses and conferences. For, such opportunities are important. You make new friends, get to visit places, enhance your knowledge and open the mind to new possibilities and ideas.
So let me share my own experience.
I have never been on a government-sponsored foreign trip in my entire career spanning 20 years in BBS. Not that I didn’t have the chance. I was head of projects and HRD and many of my colleagues even did their masters from project funds.
However, I travelled a lot. And still do. As an engineer I was invited to many places around the globe to share my experience on how I introduced the FM radio technology in Bhutan (through a technical innovation that I had made to overcome the mountains). And later, when we launched the first TV station in Bhutan, how we effectively used a cheaper DV technology, which was until then shunned by most broadcasters. After being a chief engineer I also followed my dream to be a filmmaker and got transferred within BBS to be a "simple" producer from 2002. Everyone thought I was crazy. I persisted and in less than two years I won the Japan Prize for educational programs. Then more invitations and more awards rolled in - including as vice-Chair of an international working group. I was voted to the position at the General Assembly in Almaty (Kazakhstan) after sticking my neck out and fighting for more say for small broadcasters and members.


After my term as the Director of Royal Office for Media, I went to Sherubtse College where I taught for 3 semesters. Again, who cares about status? Instead, that short stint opened me to the beautiful world of teaching and academia - and gave me a third career. Above all, it restored my faith in our youth after that terrible tragedy.
Now, my ideas and works on middle-path journalism, cross-cultural communications and human expressions have foreign universities and conferences inviting me as Visiting Scholar, some asking me to deliver guest lectures and write papers and others even to help develop curriculums and courses.

So if I can do all these, why can’t you? I am not even a trained teacher or filmmaker. I learnt all these on my own. What I am saying is that that you need to be proactive, innovate, work smart (not hard) and never stop learning. Doing the same thing day-in-day-out will get you nowhere. And most importantly (and this is the vital thing), share your stories and experiences. In 100 years of modern education in Bhutan there has not been a single memoir by a school teacher. Why is that? Who said your story will not sell? My anecdotes on how I ended up in Athang Rukha that I shared in TEDx Thimphu was picked up in the Netherlands. When I retold the story there the 2000+ audience gave me a standing ovation. Some were in tears.

Browse the Net for opportunities. Expand your network. But learn to appreciate others if you want to be appreciated. Why is it so difficult for the Bhutanese people to acknowledge other Bhutanese people who do well - and learn from them?

Foreign trips, however, should not be your goal. It should be a bonus. The greater reward should be sense of self-fulfilment through service to others and to humanity. Charity, as a cliche goes, begins at home. I dedicate a lot of my time to give pro-bono talks in colleges, institutes and schools in the country. Today I went to Dechenchholing School to talk to a class on the power of imagination and creativity. Next week I am looking forward to another session in Paro. Middle path journalism was first presented in a meet with my fellow bloggers and later at the big CBS International Conference on GNH 2015 in Paro. The idea grew from there.

However, a word of caution. Do not do anything, and just anything, with expectations or with ulterior motives. You do it out of passion, as life's greater purpose - and with conviction and consistency. Be genuine - like Tashi Namgay of Kidney Foundation and Tsewang Tenzin of Chithuen Phenday - or be passionate like our Thrash Guy, Karma Yonten of Greener Ways. People will start believing in you and will invite you. Follow these trendsetters.
Share your opinions like Passang PaSsu Tshering, post pictures, make documentaries like lopen Karchung Dorji or share simply what you have discovered, your achievements and ideas like Dumcho Wangdi. You never know where you will reach. Just put them out. A story is a story. A picture is a picture. A paper is a paper. The audience will be the judge. At the very least, you will be noticed in the Ivory Towers of Thimphu. There will be negative comments though. Pressure for you to stop if you get popular or controversial. You will be laughed at. You only need to be persistent and to believe in yourself.

In the 90s, people derided my proposal to bring TV to Bhutan. I was even threatened. When I became a producer, some of my own colleagues back-stabbed me from all angles. Now middle-path journalism theory is being ridiculed. So what do you do? Give up? Well, that's exactly what your opponents and cynics want you to do. So you shift your gear, work harder, go faster, refine your ideas better.
I am not saying that Bangkok is guaranteed if you do all or any of the above. I am suggesting that you may be able make it there and beyond - on your own. It is in your hands.

Don't wait for others and don't let people play with your life, opportunities and your destiny. We all have one to fulfil. Don't get to your death bed one day and regret things you haven't done what you wanted. 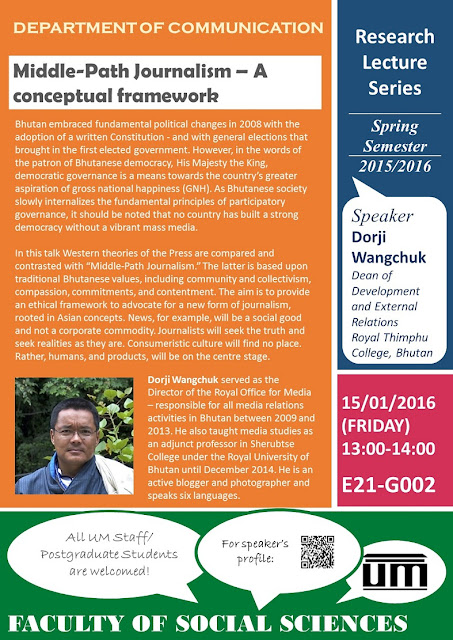 Posted by Dorji Wangchuk at 6:01 PM