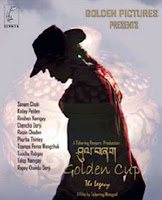 Here is a piece I sent to Kuensel that will hopefully make us rethink some of our superstitions and beliefs.  By the way, thanks Kuensel for publishing the article! (Saturday April 18, 2009 issue)

The valley of Kurtoe is infamous for poisoners.  There are horrendous stories of people dying or falling seriously sick after eating or drinking from the hands of these people.  One such woman is Tashi Wangmo, 49, of Yogpaling Gonpa under Metsho Geog.  Locals believe she caused many deaths.  Tashi therefore is feared and ostracised by the whole community.  But Tashi has a different story to tell.

She was in her late teens when a childless man Gyetshela and his wife adopted her and asked her to look after their cattle.  Gyetshela was rich but his wife was another woman who was believed to possess that fatal magical power.  Twenty years back when the couple died, people started spreading rumours that Tashi has inherited that supernatural power to kill.  She was ostracised ever since and avoided like a devil.

“My father is a tshampa and my grandfather was a lam.  We come from a very good family.  So I guess it has got to do with what I did in my past lives,” says Tashi, almost resigning to her fate.  “Actually I was told that these things don’t pass through cattle but only through some home items,” she adds.

National Council member Rinzin who comes from the same region tried to demystify this belief system in his book Talisman of Good Fortune.  “These so-called poison-givers actually do not pass poisons physically,” says Rinzin.  “It is believed they have magical powers to do so.  This makes me conclude that things are exaggerated to extremes.”

To try “cleansing” herself from that stigma, Tashi and her father sold off all the cattle, but the locals continued ostracising her.  “If I had inherited that from the cattle, then the nine families who bought the cows and bulls should have taken away that power.  But no, it was just me,” says Tashi, who has ever since devoted much of her life to prayers to undo the bad karma.

And prayers for Tashi seems to have been answered in the recent visit of His Majesty the King to the area.  Like other people, Tashi Wangmo also presented herself with some ara to greet the royal entourage along the trail His Majesty was passing through.  And contrary to the advice of the local guide that His Majesty should not to take anything from her, His Majesty boldly took two cups of ara from her hands, embraced her and authorised her to tell the world that she has served the King in person and that the whole thing about poison-givers is baseless.  Other entourage members followed His Majesty by drinking from her hands.

The next day Tashi made a shy appearance in the public meeting His Majesty conducted for Metsho geog.  She was beginning to feel like a “normal” person.  But she was still confused and her face very gloomy.

However, after flushing out her story she felt relieved and put on a faint smile – perhaps the first one after so many years.  And when asked about what she thought about His Majesty’s words, she broke down and cried bitterly.  She then wiped her tears and composed herself.  “I thought I was going to die with this stigma.  Zhab Rimpoche (His Majesty) has given me a new life.  I still cannot believe this has happened.  I hope I am not dreaming.” Tashi puts back another faint smile and after a long silence she enquires, “But why is only women ostracised with such a power?”

(NB.  A beautiful movie The Golden Cup was made based on this myth) 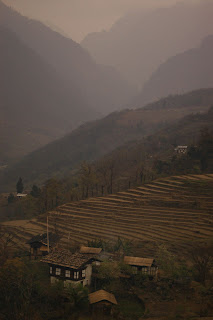 I am back.  I mean back to Thimphu and back to my blog. I have been away on a long walking tour to Lhuentse that took us to all the eight gewogs (sub-districts) and to almost every village and households. Well, to describe everything in one sentence – the trip was just enlightening!  In every sense I must say.
Let me share some of my experiences.
First of all, we live in a beautiful country.  I may sound obvious but at times between all our mundane problems and challenges posed by our sophisticated modern life in Thimphu, we forget the obvious. And a trip like this is a pleasant reminder that we are blessed to be born, and to be living, in such a beautiful place.  I have travelled to many countries around the world.  So you can trust me when I say this.  I place a picture of a hamlet in Kurtoe to further support my statement.

So, if an opportunity comes to you to get out of Thimphu and go to these places, just do it!

Second, the true spirit, or the character, of Bhutan is out there – in the villages, among those farmers and in the eyes and faces of thousands of people we met along the trail. But these places are getting empty as more and more people are attracted by the urban limelight and modern paraphernalia.  So it makes me wonder what would become of our villages (and our country) when this group, living there now, leaves this world.

So, if there is anything you could do to retain our villages, just do it!

And lastly, this fall I plan to take my children to see what I have seen so that they grow up appreciating what is truly Bhutanese.  Raising them in Thimphu, I am afraid, is no different from raising them anywhere else.  We have TV, we have iPods, we have cars, we have everything that are quite un-Bhutanese.  A journey to discover our own country is perhaps what my daughters need – especially the elder one who is moving to her teens few years from now.

Well here, I must say, create an opportunity to travel back to your roots.  Forget Bangkok or Hong Kong for once.  You will not only re-discover your own country but you will also find 'yourself'.  Your essence of being a Bhutanese, and may be, a better human being.  I am sure it would be something you and your children would cherish forever.  Just do it, man!
(Here is a haiku (a form of Japanese poetry) sent by She Yo En inspired by the above photograph.  Thanks She Yo En!)
Behind the distant mountains
The white fluffy clouds appearing hopeful
While the hamlet at rest
Posted by Dorji Wangchuk at 10:38 AM 7 comments: