Kin of the jungle

It was nice to be back to Tashigang - back to one's roots. I was born in Tongling but spent much of my childhood in Pam, a settlement some 4 km away from the town.  And precisely, I grew up among the forests and rivers between Tashigang and Kanglung. That was because a series of natural calamities hit our family home (we lost two houses within a span of few years) and so we were sort of ostracised. My grandfather, then, built a small hut away from the main village, almost in the wilderness.
Life was hard though. No electricity, no running water. My school holidays were spent either looking after cows or chasing monkeys from our maize fields. I preferred fighting off the monkeys. They rarely showed up and so I got lots of time for myself, which I spent reading comic books.  I would have stocked myself well from Jaigaon on my way home from the boarding school.
Looking after cows was not too bad either, except that quite often I would be too engrossed in comics and the cattle would stray into someone's property. Among the neighbours I used to really dread was a certain Pradhan.  He was actually working for an affluent neighbour but was so dedicated to his job that, let alone my cows destroy his crops, he wouldn't even let us enter his sokshing (private forest) to collect leaf litters.
But boys are boys and one of our favourite past times was to outsmart Pradhan and outrun him if he came chasing. Not only would we enter his sokshing, we would also try hit his orange orchard. If he had ever caught us, we were doomed. But we loved serious adventures.
Looking after cows left me with some valuable skills too.  I learnt to read footprints of animals and differentiate new marks from the old. I could climb trees and overcome the fear of heights - a skill that came handy later in life when as a young engineer I lead the installation teams on tall radio towers. I also became immune to insects bites and leeches. I learnt to swim in rivers and look for fruits and food from the forest.  However, quite often I was not able to regroup the cattle by dusk and my grandpa was so strict that I had to keep looking - dead into the night.
Something I really hated was fetching water. The nearest source was exactly at a distance of one kilometre. And you had to walk under the scorching Sun. Someone had to keep going for the whole day and some times it was unfortunately me.
And there I was, after over thirty years, traveling in the royal entourage in the East. A bit of nostalgia overpowered me as I scanned the mountains, rivers and the forest I had known as a child. The memory was stronger of people I had lost - like my late mother and more vividly of my cousin who passed away the other week. They were but painful reminders of our ultimate journey.
Nice coincidence do happen still. On our way back from Kanglung I was far behind the convoy and my car broke down just as we were passing through my village. My driver and I tried to restart the engine but we were not too successful.  After several attempts, we gave up and dialled for help. For some strange reason, I decided to leave our car and walk towards Tashigang as someone headed from there to pick us up.  It was pitch dark and it was raining. I should have been upset. But instead I was smiling. I just realised that the little mishap had actually managed to turn back the clock for me. I was where I belonged and touching my roots.  For a brief moment I felt that I was doing what I used to as a child - walking in the dark in my native village.  It seems time had stood still.  Whatever greater things you may achieve in life, you tend to miss what is long gone away from you. That, I guess, is human.
Who says time and tide wait for no man. They do.  At least for an imaginary and blissful moment.
Posted by Dorji Wangchuk at 12:59 AM 8 comments:

Everyone sees Paro from one angle.  Here is what you get from the top of Jabji peak.  It is probably the view that the pilots of Druk Air sees from their cockpits. 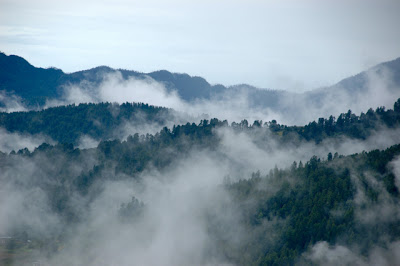 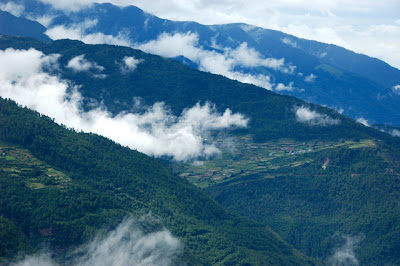 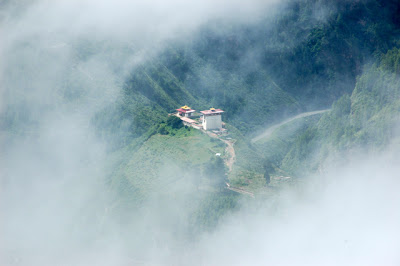 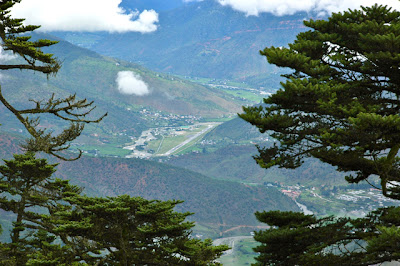 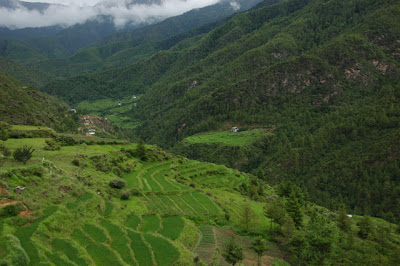