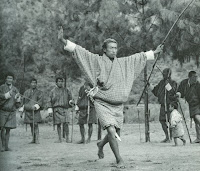 The incident involving a parliamentarian struck by an arrow has sparked an intense debate on the need for, or on the lack of, safety standards or regulations in our national sports. It is indeed a good debate but something that we could have prevented. Meaning, the issue was raised over and over again in the past and had we heeded to those voices, we won’t be discussing this issue today. But like every public issue, we are only responding to an aftermath of an event or a crisis. But what’s wrong with our favourite past time? Actually nothing. What is really not okay is everything surrounding the game itself - our refusal to alter a culture that has become a habit, which now suits us in many ways.

True, archery is not just a sport. It is a great socializing exercise. In the past, villages organised annual archery matches to patch up their differences or settle their disputes. No matter who won, the result was accepted, some ara shared and everyone went home happy and little tipsy. The game has certainly evolved - but not for better. It has now become great lobbying operation. Suppliers and contractors organise archery matches to keep work orders and bills flowing fluidly. Subordinates take bank loans to be able to play with their bosses and keep their careers going. Only few are there genuinely for the game.

Ours is also the only national sports in the world where drinking is tolerated. You could also be forgiven from staying away from your office duties for weeks. I remember once going for a signature at the archery ground because the inter-ministry tournament was going on. The civil "servant" grudgingly signed the paper only because I was a journalist. Had I been an ordinary being I am sure I would have been rebuked. These are things we can’t be really proud of. Why can’t the BAF matches be held on weekends like the European football leagues?

In the name of preserving our culture thousands of people live with a constant fear of being hit by stray arrows. In the past year, more people have died from arrow injuries than HIV-AIDS. A life of an innocent child has been forever ruined. We are quick to badmouth any minor wrongdoings but a death at an archery range does not even attract a proper investigation. If it is really the culture we are trying to preserve, we should then revert back to bamboo products. Importing American bows meant to hunt bears may be okay but then the equipment should be used in safer grounds - not in populated urban areas. In Europe, one needs a firearm license to own such equipment. But in Paro, some villagers disown their ancestral land in exchange for the latest Hoyt model. Even in Thailand, golf centres are required to put up wire mesh as high as 300 feet. Here we even don’t have a system of certifying archery ranges. The outflow of foreign exchange is perhaps not even an issue.

How do we reconcile all these? Just asking. Not questioning the essence of our national sport.