The humiliating defeat of our national football team in Qatar might have dampened the spirit of many football enthusiasts in the country. A 15-goal loss was unexpected because we thought that we had reached a different level with our qualification to this round. 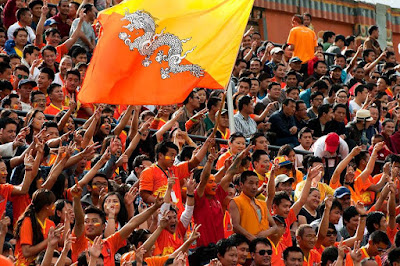 However, there was silver lining from that gloomy night - in fact a golden one. Going through the online comments from Bhutanese from all walks of life and from the small diaspora spread across the globe, it was simply overwhelming to find so much solidarity and support for our team. Every Bhutanese on Earth was united behind the dragon boys. And very few actually expressed their disappointments.

The political elections of 2008 and 2013 have divided this country along strong party lines. That’s the price of democracy, one would guess. Now, this division is in addition to professional egos, personal likes and dislikes and familial relations and animosity that have been around. So anything to bring or keep the nation together should be encouraged, supported and promoted to the fullest.
The national solidarity we see around our football team came by as an accident and not by any kind of design. That makes it even more special while at the same time calling for some positive reinforcements. The fact of the matter is we cannot expect it to bloom into something really significant unless we invest in it. Just as it appeared from nowhere, it might also disappear in a similar fashion. Hence we should celebrate this coming together as a nation through football, nurture it and let it grow so that it take us all to new heights. I have always said that we don't lack resources; we lack resourcefulness. That is holding us back from becoming a great country.

The dragon boys are young and so they have a long career ahead of them. Unlike an average Bhutanese these boys have strong determination, commitment and sense of purpose. Every match that they have lost since winning over Sri Lanka they have gone down fighting till the last. If we invest in them not only our football standards will reach the next level, we would have found another way to keep this country bonded.

The first time I met Chencho Gyeltshen was in Lungtenzampa School. Having scored Bhutan’s winning goal against Sri Lanka, Chencho became an overnight sensation and was invited in a panel discussion with HE Khamtrul Rimpoche that afternoon.

Having watched him in the field, I was pleasantly surprised to find a boy who was humble, soft-spoken and very reserved. On the stage, he felt totally out of place in the presence of the young Buddhist master and other panelists. “I really don’t know what to say. I haven’t achieved anything to be here with such illustrious speakers,” he started off. His voice dried up on him several times even before he completed a full sentence. Seeing him in trouble, Namgay Zam, the moderator, gently came to his rescue and hinted, “You can tell the students how you made it to the first eleven.” Chencho felt better. Khamtrul Rimpoche also gave him a more reassuring smile. Chencho resumed. “Yes. Let me tell you how I got to the main line-up of the national squad,” he said. “We were playing in Dhaka against Bangladesh and towards the end of the match the coach signaled to me to warm up. I did and after a couple of minutes I was asked to enter the field. I checked the time. We had 15 minutes to go. I said to myself, ‘Well, all the years of handwork now boils down to just 15 minutes. Prove yourself, man!’ and I went in and gave the best of myself. When the game ended the coach came up to me and patted my shoulders. I knew then I made it”. The children in the hall applauded. Chencho gained more confidence. “In life, opportunities come in small doses. You have to grab them and give your best”. He went on to narrate how he still faced difficulties in convincing his parents and relatives about being a professional footballer. He is often told by everyone that football won’t bring food to his plate. “But I believe in myself and I work hard. I still work very hard. I always go for practice 30-40 minutes before the coach arrives. He sees me working harder than others.”

I caught up with Chencho after the symposium where some tea were arranged for the speakers and the guests. Namgay Zam introduced me to him. Chencho bowed down to me almost in reverence as we shook our hands. “You know, Chencho, I have a suggestion, if I may,” I told him. “Yes, sir,” he replied. “You should forget your college plans for now. And instead focus on football. Keep playing for the national team”. “Yes, sir,” he replied as his face brightened. I suspect that he finally found someone who was speaking his mind. “When you are out from pro football at around, let’s say, where you're 29-30, you can go back to college. There could be some sorts of scholarships for former players. You can graduate at the age of 33 and then you can then start a new career. And assuming that you will eventually be retiring at 60, you will still have 27 years of whatever career you will be choosing after football.” “Las la,” Chencho replied. I continued, “And come back to me, if you need help to go back to college. But keep playing for now”.

I hope he does because he will go very far. By that I mean really really far. College can wait for now.


(Many professional players in Italy go back to college after their football career. One of them was Paolo Rossi who led Italy to World Cup victory in 1982).
Posted by Dorji Wangchuk at 11:58 AM 9 comments: