The State Visit of His Majesty the King to Japan was more than just a state visit.  It was a journey. A journey of life, hope and friendship. Something unexplainable which can perhaps be expressed only through images. Pictures they say tell thousand words. So while I try to put together my thoughts and reflections, here is a photo reportage. 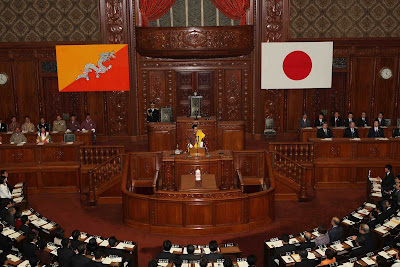 With my deep respects to His Majesty the Emperor, Her Majesty the Empress, and the People of Japan, I hereby accept with great humility this opportunity to address the Diet of the nation of Japan:

State Banquet Address of His Majesty the King in Japan, Tokyo 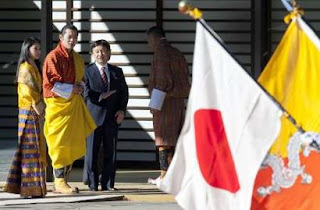 First of all, may I convey my deep respects to His Majesty the Emperor and Her Majesty the Empress.
Your Imperial Highness the Crown Prince,
Your Imperial Highnesses,
Members of the Imperial Family,
Your Excellencies,
Ladies and Gentlemen,
My wife, Jetsun and I are deeply grateful for the kindness and warmth Their Majesties have accorded to us. We are deeply humbled. As a young man, I must say, that the only way I can accept such generosity, is to do so on behalf of the people of Bhutan, whose love and affection for Japan is unique. I have always believed that the Japanese and Bhutanese people share something that is unexplainable yet deep and profound, something that transcends our day-to-day interactions, and even our histories. I have always seen this in the way my people speak so affectionately of Japan without ever having been to Japan. And then I saw it in the outpouring of support for Japan in March, with people from all over Bhutan visiting temples and monasteries to pray for those affected by the earthquake and tsunami. Your Imperial Highness, our people share a special bond.
Therefore, I respectfully accept the kindness and generosity of Their Majesties and the People of Japan towards me, as a tribute to the spirit of solidarity and goodwill with which the People of Bhutan embrace Japan and her People.
I would like to convey the prayers and good wishes of my father for Their Majesties and the Imperial Family. In doing so, I take the opportunity to acknowledge the pivotal role played by the personal bond between Their Majesties, Your Imperial Highness the Crown Prince and my father, in furthering the warm friendship between our two countries.
Personally, I have to say that it is a special honour and happiness being here upon the invitation of Their Majesties so soon after our wedding. For, it is to Their Majesties that Jetsun and I will always look for inspiration and guidance during the course of our life together, and as we serve our nation.
I would like to raise a toast to the good health and happiness of Their Majesties and to the peace, progress and prosperity of the People of Japan.
Posted by Dorji Wangchuk at 5:32 AM No comments:

Simple gestures can move the world. This is what seemed to have happened when Fourth King of Bhutan, His Majesty King Jigme Singye Wangchuck visited Japan to attend the funeral of Showa Emperor in February of 1989.
According my friends and people I talked to, that day was misty and cold – almost freezing. US president Bush (the senior), French President Mitterrand, Prince Charles etc. were all there heavily dressed, furred and well-covered. Our King was there too but with our knee-length gho.  No gloves, no hats, no mufflers or anything - besides our simple gho.  The world leaders were all seated on the VVIP stand besides the Showa emperor’s body that lay-in-state.
As the leaders were called upon, one by one, to pay their respect in front of the casket, they got up, paid homage and immediately left after doing that. The cold, I guess, was unbearable.  But the King returned to his seat. And was the only one to do that.  He sat there braving the cold in the most dignified manner - for hours till the ceremony was over.
The NHK camera, that was giving live telecast of the event to the world, kept zooming back on him. And the whole country was amazed and kept asking, kare wa darey deska? (who is he).  Soon they found out, as the commentator introduced him as the King of Bhutan.  This simple gesture moved a nation - already in grief.  23 years laters people still talk about it vividly.  It has procured immense goodwill that continues to genuinely bond the Japanese and the Bhutanese people - no matter where they are or what they do.
We often think that one has to carry out extraordinary deeds to be noticed or to change the world. Wrong. Listening to this story over and over again here in Tokyo from different sources, I couldn’t help thinking about how fortunate we were to have had a King like him.
His Majesty just turned 56 - day before yesterday. May the heavens shower him with good health so that he continue to inspire us and touch more lives and hearts in a world that is increasingly becoming nonsensical.


(At the time of writing this article, the Japanese people are waiting with great excitements the visit to Japan of His Majesty the King Jigme Khesar Namgyel Wangchuck and Queen Jetsun.  His Majesty's gesture following the Japan earthquake, the royal wedding and the discovery of a new butterfly species in Bhutan by Japanese researchers are already making rounds)
Posted by Dorji Wangchuk at 8:58 AM 11 comments: