Lunch. No lunch. We are writers 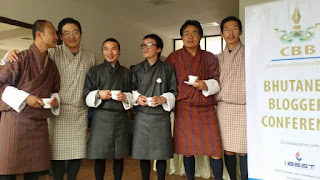 “Sorry, sir, we are waiting for the projector,” NawangPhuntsho, one of the founders of the Community of Bhutanese Bloggers, apologises for the delay. It is already 10.30 and we were supposed to start at 10. More than 30 bloggers had gathered at Hotel Namseling for the first “unofficial” gathering of the Community of Bhutanese Bloggers. Unofficial, because in Bhutan all large meetings, conferences are sponsored and/or organized by the government. This is a private initiative. But the turnout is impressive. People from different walks of life and stature have come together – drawn by something they share in common – blogging.

The delay is far from being bothersome. I use the long waiting time to catch up with Sangay Khandu, a parliamentarian and an ardent blogger, and Gyaltshen K Dorji, a journalist who writes on technology for Bhutan’s national newspaper, Kuensel. I meet other people that I have met only in the cyber space. Among them is Rekha Mongar. "Nice to meet you after reading all your blogs," I tell her. Others are also as excited to meet me in person. “Sir, I have been reading your blog since my schooldays,” they come extending their hands. I feel flattered.

Finally, after an hour, the LCD projector arrives. We all clap our hands and dub it as the chief guest. Nobody seems to mind the delay. “Punctuality is not in our culture. And since cultural preservation is what we do, we should maintain this too,” I remark. We all have a laugh. The First Conference of the Community of Bhutanese Bloggers sets off. Riku Dhan Subba is the first speaker.

Riku says that of late he has been blogging about the importance of staying connected to his village. “Maintaining my roots gives me an immense pride plus an identity and connection to the community that I belong,” he says in his presentation. “I visit my village at least 5 times in a year”. Riku’s talk is simple, humble and humorous. But what catches everyone’s breath is a story of a radio. “My father was the first guy to own a radio in the village. People gathered every evening around the radio to listen to it. Among people who came was also someone who would become my mother. I was told, that’s how they met,” he says timidly. The hall burst into laughter and applause. Riku continues, “And this is a picture of a tree in my village – a very special tree. Why this is special to me?” he asks. How are we supposed to know? “I was born under this tree,” he adds. “My mother didn’t stop working even when she was pregnant. She went into labour and I was born – under this tree”. Another round of applause and laughter. Riku’s stories were simply awesome.

Sangay Khandu, an MP from Gasa and prolific blogger, goes next. “My talk will be boring compared to Rikku’s,” he starts off. “But since I am an MP, I will share my knowledge of being one for seven years now.” Sangay enlightens on how bills are passed, issues raised and how legislations are enacted. ‘Always something new to learn everyday. Today I learnt about what House of Review really means,’ I updated my facebook page. It is true. I thought House of Review was something else.

Ugyen Lhendup, a small and unassuming guy, takes the stage next. He is an economist and talks about how pro-poor policies and public investments between 2007 and 2012 have brought down the poverty rate in the country. He had done an independent research and analysis and blogged about it. Among the series of slides with figures and charts something catches the eyes of everyone. 1953 is marked as the start of the Five Year Plan in Bhutan. The conventional wisdom and all textbooks say 1961. “Isn’t it 1961?” someone enquires. Ugyen goes dead sure on this. “I read the proceedings of the first National Assembly of Bhutan and there it is clearly mentioned that we are now starting off the planned development process. The year is 1953”. “He may be right,” I add, “Our Third King instituted the National Assembly in 1953. I also read somewhere that the planned development process was originally the idea of the Second King. So it is possible that the idea was carried forward by the Third and that he could have made it official in 1953 when the first National Assembly was convened ”. Another new thing learnt. Another to be verified. I love discovering.

The last to take the microphone is Tshering Dolkar, a professor at Royal Thimphu College. She takes us on a long journey of hers as a writer. From writing poems and essays for Kuensel as a student to writing textbooks for schools when she worked in Education Ministry. "Then I discovered blogging and found I could publish my writings. Then later on the facebook where I shared my writings and passions with great writers," she adds. “I have never authored anything and so in that sense I am not a writer but here are some poems I wrote through the years,” she proposes timidly. She reads couple of them and we are all blown away. “Why is that they were never published,” I thought. I didn’t ask her though.

Open discussions followed on subjects ranging from personal freedom to inspirations and motivations as to why we write what we write. The chairperson, Nawang Phuntsho, had to stop the deliberations because the conference had overshot the time – by only 3 hours. Lunchtime was long gone. There was no lunch ordered either. No budget. But the founders wanted to have this conference anyway. To start small. To start somewhere. So no issues whatsoever. We leave the place smiling - having heard great stories and made new friendships; and inspired even much more to pursue what we all share in common – writing.

Lunch or no lunch.

I had my share of rejections and disappointments. I will list down only some ten percent of my lows in life here. The other ninety percent? There were not even worth the space in my memory.

At 5, I was denied admission to Tashigang Dzong to become a novice monk. Otherwise by now I would have become Dorji Lopon instead of remaining as Dorji Wangchuk. :)

At 7, I was rejected by Don Bosco School (Kharbandi). I entered a year later after Her Royal Highness Princess Dechen Wangmo Wangchuck granted me a kasho. Sometime God appears as a princess. (I named my second daughter after her, incase I forget her kindness. I am absent-minded).

At 16, when I was about to appear for my ICSE, my paternal uncle who was to send me to a medical school was killed in an accident. My dream to become a doctor came to a dead end. Instead of Shillong, I suddenly found myself sent to a plywood factory in Phuntsholing by the Directorate of Manpower to work as an operator helper. I cried every night I got home after work.

At 20, I got rejected by Druk Air. I wanted to be a pilot or an aviation engineer. To add to the injury, someone got in my place.

At 26, while I was away and still doing my university studies my mother passed away after a long illness. My world crashed in front of me. I was not only devastated, I was close to depression and lost a year recovering and nearly missed my graduation quota.

In my professional career I was killed many times (for details, read my memoir when it comes out). I was passed over for promotion several times. I was sidelined. Everything doable within human limits was done to me. But I kept smiling and everytime I reinvented myself. From being the chief engineer, I chose to become a simple television producer. That's why I said at the Mountain Echoes 2015 that life is not linear; sometimes you have to take a lateral route. Sometimes you need walk backwards to launch forward.

I even had to resign from an organization (BBS) that I had built with few others. There wasn't even a simple tea party for my departure after serving there for 20 years. There wasn't for other pioneers either. Can you imagine, how disappointing can that be? But again, I bounced back becoming a journalist and made a name for myself as a columnist for Bhutan Times - nation's first private newspaper.

Then finally when I thought that I was done with all my bad Karmas; when I was at the peak of my career, fate knocked on my door and said, "wait we are not done with you". In a a minor scuffle in front of my house someone nearly killed my wife - accidently. I spent a month in the hospital and almost six months thereafter nursing her back to health. The months following the accident were some of the most difficult periods in my life. I felt defeated, destroyed and dejected - all at the same time. For the first time I found hell. But as Churchill once put it, if you are going through hell, keep going. What else could I do? I kept going. On the flipside that whole incident made me strong. Nothing scares me now. In fact I cherish every person I meet or work with, every opportunity that comes around and every day that I wake up. Being to hell and back, I tell you, is a great way to appreciate simple things in life - things like just being alive.

So if people think that I had a smooth, seamless and illustrous career, it was absolutely not the case. It is just that I don’t talk about it or brag about it; and I don’t even think about it at all. More importantly, I keep bouncing back like the bobo doll. I keep reinventing myself. I have not only done that, I have even thrived in every new profession that I ventured into - from engineering to filmmaking to journalism to teaching.

If there is something that I have learnt about life, it is that it goes on.

So keep falling. Keep bouncing back with a smile.

As for me, to put it alla Decartes, I think. Therefore, I am (a bobo doll).

Posted by Dorji Wangchuk at 7:45 AM 7 comments: