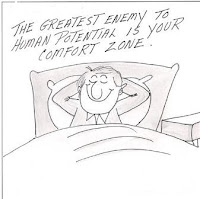 I must say, I am truly blessed with a comfortable life. I have a job, a loving family, many friends and wonderful colleagues at work. And if we go by the trend, I could afford to drive around in luxury, vacation outside the country every now and then, but go party every evening or play golf during weekends. At work, I could stick to rules, play safe, avoid making mistakes, come and go on time and never step on anyone's toes. Lest someone question my being "true" Buddhist, I could invite monks to chant some prayers and play some drums and horns at my place. I could also be seen going around the Memorial Chorten every day.
Or else........ I could come out of my comfort zone. I could give some time and energy to some social works with those who are less fortunate, help some poor children complete their studies or pay for some addicts go to some rehabs. At work, I would not only "do my job", but also spend few hours more every day to do my work better, make an extra effort to help someone who doesn’t fit the criteria, take some initiatives to develop the system (after all the existing rules or business models were created by someone before you) and challenge the conventional wisdom - everything in good faith, of course.
Few days back I met a group of former addicts and alcoholics. I had met them some years earlier while I was researching on my film script. While I was happy to see them again, I was saddened to realise that many of them, despite being clean, have not moved on with their lives. The reasons were varied - a society refusing to accept them back, friends and families who have erased them from their lives, a system that has stereotyped them and public officials who throw them out of job interviews, etc.
It was heart breaking and equally disturbing for a society that brags about jampa dang nyingzhi (love and compassion). But getting discouraged by what is not going right, or disheartened by people who live in their comfort zone, is not style. I tried to lift their spirits by saying that we were all born for a purpose and as long as we breathe there is hope. Of course, I empathized with their hardships. I know the unreasonable bureaucratic hats we wear in our official positions or when we are in positions of power – and all our contradictions and hypocrisies. Still this is a country with a bright future and a nation that can always hope in a functioning government and, above all, in a caring King.
Leaving one's comfort zone can be tough. One has to make sacrifices in terms of time and resources, be almost immune to public badmouthing and not be carried away by gossipmongers and cynics. However, as a human being you have one chance to do something good so that when it is time for you to leave this world, and you don't know when, you will at least leave feeling good that you made a difference in someone’s life.

Transcript (official) of His Majesty the King's address to the Parliament, 19 Nov. 2010

In conclusion, I want to remind you, the members of Parliament, that our People and I have placed our complete faith in you. As King, I have seen that you have served the nation with dedication and commitment from the very first session of Parliament till today. During this session you will be deliberating many important bills and acts. In doing so, I must remind you that in focusing on the words and details of the laws and the needs of the present, do not be blinded to the future of our country and people – and the long-term objectives and priorities of our nation. Let us all, in doing our duties, keep the interest of our people and our future generations above all else.
Posted by Dorji Wangchuk at 6:54 PM 4 comments:

Show must go on 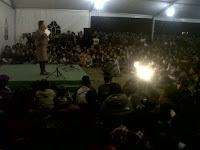 Bumthang is one of my favourite places. It is also, undoubtedly, the most blissful spot on Earth. The gentle slopes surrounding every valley are in sharp contrast to the high mountains and deep valleys that characterise much of the landscape of my country. Bumthang was blessed by Guru Padma Sambawa in the eighth century when he introduced Buddhism. Guru actually came to Bumthang to rescue the soul of a local king that was kidnapped by a serpent-demon. The Guru subdued the demon. And on the spot now stands Kurjey Lhakhang – one of the most sacred places in Bhutan.

Another rescue mission is on again. Getting back the souls of thousands of people who have been traumatised by a fire tragedy of 26th October 2010. The fire nearly wiped out the entire Chamkhar town rendering 77 families homeless and 2 deaths and nearly killing the soul of the people who were celebrating the last day of the famous Jambay Lhakhang festival.

On 30th October as we drove in to Chamkhar my heart sank. I hate destructions, violence, deaths, and anything that makes people suffer. At such times I wish I had all the magical power. The next day when we met the affected people, who were gathered in a large tent, it was more shocking. To see people who were once prosperous lined up for food and dole, was heart-breaking. That evening as the King visited them in their shelters in freezing temperature, He came up with a revolutionary idea. The mood was cold and gloomy. They should smile. They should laugh, gather their strength and the confidence and move on. Whatever happened has happened - life must go on. I was tasked to put together a group from the entertainment industry. I started making some calls. The next day 13 singers and comedians rushed to Bumthang and straight to the venue.

The first night was tough even for the comedians. But as expected Phurba Thinley broke the ice. “I am sad for myself,” he opened the show. “Because Bumthang is our biggest market for filmmakers. Now my income will be down.” The crowd suddenly burst into laughter. The show began. But singing in front of lifeless face was still difficult. One singer nearly broke down in the middle of the song.

On 4th November we had the fourth and the final show. Over 4,000 people came from all over Bumthang. People laughed and jeered. They even howled and whistled. The climax was a duet between Rinchen Namgay and comedian Leki. Leki was dressed as a Bumthap woman and sang with a perfect woman voice. For a moment the tragedy was forgotten - replaced by happiness and smiles all around. There was the real gross national happiness!

Bumthang is slowly putting the tragedy behind them. They have begun to see the light at the end of the tunnel. There is a now sense of normalcy and a sense of reassurance. People have begun to dream again – even people who had lost everything – including hope.

The show must go on.
Posted by Dorji Wangchuk at 1:03 AM 3 comments: