Convocation of the Royal University of Bhutan, Thimphu, 15 July 2011

Transcript of the royal interaction of His Majesty the King with the  graduates where His Majesty started by saying, “It is a tradition that I speak frankly and directly. I always tell you the truth however unpleasant or painful it may be.”


The start of democracy and its future in Bhutan:
“On this issue, I can only repeat what I recently told the newly elected Gups recently. Our main priorities are the peace, prosperity, security and sovereignty of Bhutan. Towards these goals, we must all work together in first safeguarding our strong foundation of unity and harmony. In our small society, divisions and cleavages can manifest themselves in very destructive ways. We have seen this in other larger countries and the great price they have had to pay. Ngalop, Sharchop, Lhotshampa, Christians, Hindu, Buddhist, me against you, us against them – some people might resort to such useless and irrelevant classifications in their work and dealings with each other. In today’s world, it is more important that we worry about haves and have-nots – economic disparity. I always say, in the past, we were all equally poor. Today, with growing prosperity, we in Bhutan must be mindful of the threat posed by economic disparities within society. Its unfortunate and lasting effects can be seen in so many nations around the world." 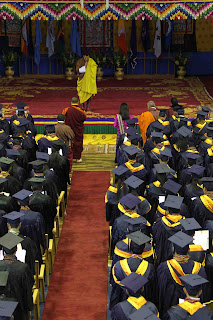 "I think the beginnings of democracy in Bhutan have been very successful. However, it will take constant work and commitment to make it a lasting success. It’s a long process during which we must deeply contemplate each step so that we do what is right. Mistakes we make today will be irreversible. We cannot falter on our path to a vibrant democracy with an equal and just society. There is no room for divisions and disparities in society.
We must always remember that the ultimate goal of all Bhutanese is the peace, security and sovereignty of our country. I am not speaking only of the physical defense of the nation. (The armed forces, without hesitation, will sacrifice their lives to protect our nation and your security. I am confident of this). I am speaking of the peace and security that comes when we, at all times, are united in our love for our country through an abiding respect for our culture, values, laws and the national interest. This is the unique unifying Bhutanese character as individuals and as a nation, which must be nurtured for all time.”


On Kidu for the weakest sections of the population and on Land Kidu:
“People must feel ownership over democratic growth. Public apathy is a democracy killer. However, for ownership to be nurtured, our people must have a stake in it. Land ownership is the ultimate share or investment that a person has in the success of his or her nation. From this can be built his or her future and the future of their children. It is for this reason that I have since my first address to parliament, always worked on land reforms in rural Bhutan."
"For the future, due to the limited land available and growing urbanization, I feel we must shift focus from land ownership to home ownership by families. Creating equal stake in the country for all our people will be the key to the success of democracy.”


On the system of Kabneys and Patangs creating inequalities in society:
“The solution to inequality is not in doing away with the kabney and patang. To understand the system of kabneys and patangs, you must first understand that our nation is a unique, small spiritual nation where our forefathers viewed their responsibilities to their fellow citizen and the nation in a special way. They were deeply connected to each other and to the country. They thought of service for the greater good as their duty. Thus, into such a nation, was born a unique system of kabneys and patangs based on merit. The kabney is the namza of the Buddha, of saints. It serves to remind the bearer of the need to carry out one’s duties with humility, compassion, justice and integrity. The patang is the tool of a warrior signifying the pledge that one has made to sacrifice oneself in the service of the nation. This is the tradition of patang and kabney I believe in, and the one which I hope inspires those who wear them. Being based on merit, kabneys and patangs are important in recognizing duties, achievements and values. The system is fine except for one small problem. In general, kabneys and patangs represent the office and not the individual, yet, some people continue to wear them even when their term in that office is over.
"The problem of inequality is a much greater issue which should be addressed through bridging economic disparities at the national level, learning to respect one another irrespective of wealth or status at the individual level, and through the great social equalizer - education.”


On the importance honest and frank communication between young Bhutanese and His Majesty:
“Your views and thoughts are important to me. I want to know what they are, not change them. And while my advice and guidance to you may not always be pearls of wisdom, they will always be the truth.”


On building their future:
“As young citizens, all of you must be contemplating with excitement, the future ahead for yourself and for Bhutan. The future of the nation rests in the hands of her individual citizens.  Each of us must first be able to stand up and realize our own potential as individuals. Then we must fulfill our obligations to build loving, united and strong families."
"Further upon these, we then build our higher allegiance and commitment to society and the country. There is complete interdependence in the relationship between these elements of a nation. Whatever goals you set for yourself, as you go out to fulfill them, do so with the right values – values that enrich your own life and the lives of those whom you touch on your journey. Gain the wisdom to achieve your personal goals and ambitions in harmony with others as they strive to achieve theirs. Acquire the right skills and knowledge but remember that learning is a lifelong process. Utilize the experience that comes from your personal efforts as you go but do not forget to use the vast experience that exists in history. I hope these words will be of use to you at the start of this new chapter in your lives.”

Posted by Dorji Wangchuk at 2:44 PM No comments: 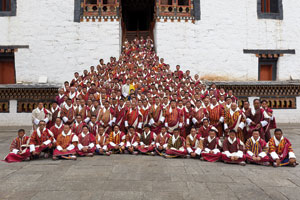 “I say, with happiness and great satisfaction, that in the few years since 2008, we have conducted the general elections, adopted the Constitution, and formed the houses of Parliament, constitutional bodies, and the Supreme Court. And today we have accomplished yet another milestone, in establishing the first local governments under democracy. We have, therefore, laid all the founding pillars of democracy in Bhutan so early in my reign, as I fulfill the vision of my father, HM the fourth Druk Gyalpo, of a vibrant democracy.
Today on this most auspicious occasion, let me take this opportunity to share some of my thoughts with you.
It gives me immense pleasure to congratulate the representatives of the gewogs of the 20 dzongkhags and to thank them for having come forward to serve their communities. I am also grateful to the Election Commission of Bhutan, civil servants, armed forces and volunteers. With your hard work and the prayers of the Dratshang, we have conducted the historic first local government elections under democracy. I appreciate the efforts made by many people to travel and vote in their constituencies, in the spirit of democratic participation.
As a symbol of the independence and importance of local government, I am awarding your kabneys from the Throne. However, as you carry out your duties, remember you are not there to seek status, wealth or fame. Your primary goal is to serve the people without prejudice and bias and to always hold the interest of the nation above all. As citizens of a spiritual nation, be compassionate and fulfill the aspirations of the people with the highest standards of integrity.
We - elected officials, government and the King – are all here to serve our nation and people.
I must remind you that in democracy there are no winners and losers. Those who are capable and desirous of serving their country and people should come forward and stand for elections. Those, whom the people choose, must then serve without fear or favour. If we can do this, then democracy succeeds and the nation wins.
Democracy did not come to us overnight. It was a carefully planned process full of hard work and sacrifice, led by HM 4th Druk Gyalpo. Dzongkhag Yargay Tshogdus were established as far back as 1980 and Gewog Yargay Tshogchungs in 1990. Decentralization and empowerment of the grassroots has been a constant process, culminating in the transfer of powers from the Throne to the people under democracy. In the exercise of these powers, local governments are invaluable to the people.
That is why, first of all, I want to dispel a false perception. Local government is NOT the lowest level of government; it is the nearest and closest level of government for our people. For rural Bhutanese, local governments are indispensible avenues for participation in democracy and development. In the long run, the success of democracy in Bhutan will be determined by the success of local governments.
We are a small landlocked country, and our highest goals are the peace, prosperity, security and sovereignty of our nation. It is an important responsibility of Gups to ensure a harmonious and united society. In standing for elections, you sought the votes of the majority. In carrying out your duties you must gain the trust and faith of all the people. You must have intimate knowledge of the daily lives of the people in your constituencies; work in constant and close interaction with them and nurture cooperation, consensus and close-knit communities. In a largely rural country you are important not just in carrying out vital duties towards achieving development objectives of the people, but also in bringing about a harmonious and united society.
You might think that I have detailed your duties and responsibilities and the importance of local government, but have said few words of felicitation and praise for your success in the elections. Your work is yet to begin, and praise will not solve any of the problems facing our people. If, after five years, I find that you have served your constituencies well, that you have worked hard and without prejudice, and that above all, you have not hurt the sentiments of my people, I will be the first to commend and praise your achievements.
Posted by Dorji Wangchuk at 10:26 PM No comments: