As we are, so are they

I don't claim to be an expert on American politics but I can say for sure that some things are universal. In other words, as we are, so are they.
Even from afar I can say that moderate Americans, today, are in a denial state. They don’t want Donald Trump to become the president. So they think he will not win. My bet is that he will. But I hope I am wrong.

The reasoning is very simple. 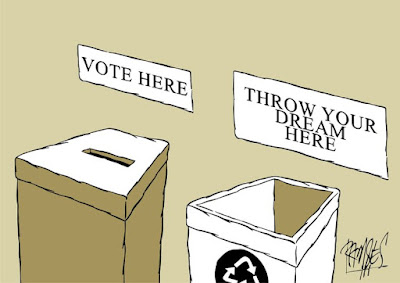 First, he represents the anger of the American people against their leaders – for failing them for so long. For taking them for a ride till now or for not fulfilling the campaign promises they make every four years. And because the voters have written them off, them meaning established politicians, Donald has, beyond anyone’s expectations, dismantled his 17 republican opponents - one by one. The more they tried to down him by pointing out flaws at his unconventional way of doing politics, the more his unconventional politics gained momentum.
Second, he really understood how the American media worked. I mean he really did. And that is – they thrived on controversy, conflicts and character assassinations. So every time he fell behind in polls, our Don would just pull off one of his antiques – against Mexicans, Chinese, gays, lesbians or the disabled. The American media would right away swing theirs cameras towards him. And immediately the ratings went up and Donald meanwhile got the limelight. It was a win-win situation. It is estimated that the American media provided some US $ 4 billion worth of free airtime.
Third, Trump’s supporters are angry people. And angry people are noisy people. And when a small group of really angry people makes noise, the majority falls silent - and in some case even agrees with the angry minority. This is not my invention but evidenced results of social and psychological experiments carried out in the 1950s and 1960s in the US. In fact those experiments were the first to coin the term - silent majority.
So unless something drastic happens from here and November, Donald will smoothly sail his way in to the White House. If he doesn't he has already made his mark and has revealed some of the greatest underlying truth and realities.
Now to contextualize to our situation here in Bhutan, what does it mean for us? To answer that let me reverse the title of this blog post and say, as they are, so are we. We can learn from the mistakes of others (sorry for the cliche'). I mean from the failures of democratically-elected governments in other parts of the world.

As a nation that has just entered the game of democracy, we can actually build a better one. A more successful democracy. By the way, there is no one single form of democracy. We can shape it the way want – if we want. We can have more governance instead of too much government - and where the government is more responsive to the feelings of the people. Politics need not be equated to lies, money and power but to service, humility and truth.

And finally, ordinary people should not be made to feel insignificant. Unfortunately we are beginning to see that happening here.