Wangdue – the day after 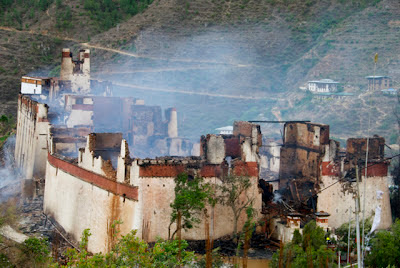 A thick smoke was still gushing out incessantly from Wangdue Phodrang dzong. An officer with a megaphone stood atop a fire engine directing his men to point the water jet toward what used to be the stationery store of the dzongkhag (district) administration. “Heaps of paper are still burning,” another officer told me.

A day after the 17th century historical monument was razed to the ground by a devastating fire, I stood there helplessly and together with my friends - among charred beams, broken pillars and burnt cornices. The dzong was destroyed to the last inflammable item - making it the worst fire disaster in over sixty years. The last incident was the destruction of Drukgyal Dzong in Paro in 1951.

The area was cordoned off and accessible only for investigation and recovery teams. Every now and then, a team of volunteers or soldiers came out carrying half burnt statues, loosely-bound scriptures or anything they could extract from heaps of earth and fallen structures. We silently rejoiced at every item that was salvaged. After all, every object represented a piece of our history.

Shock, sadness and anxiety were visible on every face around us. Army personnel and fire fighters, on the other hand, were simply too tired. They had been working since the fire broke out the earlier afternoon. “We brought the fire under control around 3am in the morning,” one fire officer told me. “It was dangerous but we had to do that at night or else by morning strong winds would blow again and the fire could spread to the rest of the town.” Yes, the wind. Wangdue was known for that. The wind in fact kept slapping ashes and dusts on my face and into my eyes.

Wangdue Dzong was built in 1638 by Zhabdrung Ngawang Namgyal. He was a drukpa lama who unified Bhutan under one central administration. The story goes that when the Zhabdrung was looking for a site to build the dzong, he came across a boy named Wangdue playing by the riverside – making a sand fortress. The boy told him that he was building a phodrang (palace – fortress). The Zhabdrung then took that as the good omen to build Wangdue Phodrang dzong on the ridge above the river. And ever since, except for few repairs, the structure had remained intact.

Wangdue Dzong was built to protect the more important and grander Punakha Dzong (that is located just 13 kilometers upstream) from possible incursions from the south and to facilitate the spread of Buddhist dharma in Bhutan. However, thanks to its strategic location (Wangdue falls on the East-West highway), every Bhutanese has fonder memories of Wangdue for it greeted travellers coming from every direction. After a long head spinning drive down from Pelela in the east or snaking upstream from Tsirang in the south or hopping from Thimphu in the west, Wangdue Phodrang was there to greet you - sitting majestically atop a ridge on the confluence of two rivers. It is sad that for a long time to come, these journeys will not be the same again.

On a more personal note, I visited the place several times. The most beautiful memory is, of course, of the dzong playing location to my documentary film “Rocking the Himalayan Kingdom – Blof in Bhutan”. The Dutch rock band, Blof, and local traditional singer-song writer Jigme Drukpa were working on a musical fusion and were recording a song inside the dzong. The documentary did very well in the Netherlands and Belgium in 2006 kicking off my indie career. My Dutch friends were as shocked as I was, when they learnt of this tragedy.

It was close to midnight when I got back to Thimphu. Although dead tired from the long day, I found it difficult to sleep – still disturbed by what I saw. So I lazily switched on the TV, which was just in time to catch some statements by His Holiness the Je Khenpo on BBS TV. “Tragedies happen and that's fate. But we are fortunate that all important nangten (relics) were saved and no human casualties were reported.”

Hearing those words, I felt a lot better.

Maybe this is really fate. Or maybe this is Mother Nature’s or God’s way of bringing our people together, to build something better and ultimately make us come out stronger as individuals and as a nation.


(At the time of writing this article, over 16,000 people had signed up on facebook as a part of Citizens' Initiative to rebuild the dzong.) 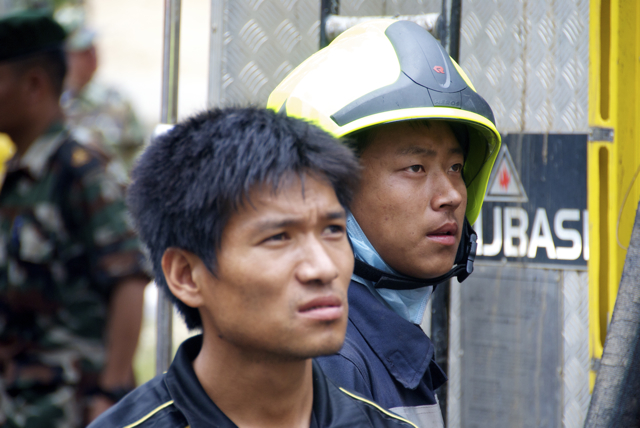