Seven high points in my life. Until now.

Business Bhutan - the country's first financial newspaper asked me to feature in their Seven page. Here is what I shared about myself in that page.
SEVEN high points of my life
1. Graduation, 1995: Doing my university studies in Italian was tough that I doubted if I would even complete. I not only graduated but did it with a distinction from the University of Bologna. As a part of a bet, my friends threw me into the icy sea with my Ferre suit on.
2. Birth of Tseten, 1997: The birth of our elder daughter gave back our lives. Earlier my wife, who was expecting a twin, had a miscarriage and we were both shattered. When Tseten came to life, we also felt like getting a rebirth. Our second daughter Dechen brought back all the laughter in our home.
3. Launching BBS TV, 1999: In 1995, in my final year at the university, I developed a technical proposal to introduce TV in Bhutan. I sent it over to Lyonpo Jigmi Thinley who was then Bhutan’s Representative to the UN in Geneva. Bhutan Television was born. But many obstacles came in between and project only got through in January 1999. On June 2 as I escorted Her Majesty Ashi Tshering Pem to switch on the signature logo, I felt a great sense of achievement. The country was celebrating the Silver Jubilee of Fourth Druk Gyalpo’s reign and the launch of television was a highlight. I can never forget the smile on the face of our legendary King as he announced the era of television.
4. BBS FM project and the ABU Engineering Prize, 2000: FM technology was written off because of our mountainous terrain. But my field tests with low-powered transmitters proved otherwise. Of course, I couldn’t predict the signal at high power with possible multipath fading and interferences. Nevertheless, we went ahead with our National FM project. When we switched on our first station from Dochula I was so excited with the results that we kept travelling for days and nights doing field measurements. For my works in VHF band in mountainous areas and for introducing TV in Bhutan I was conferred with the Asia Pacific Engineering Prize in Manila.
5. Winning Japan Prize, 2003: Winning the first major international documentary award came as a surprise because I was never trained as a filmmaker. In the run-up to the Grand Finale, I was the underdog. So I joked with the organizers that if I won, my country should be announced first. When the result was declared and the presenter went, “And the winner is – from the Kingdom of Bhutan…..” I went totally blank. I could barely feel my feet as I walked up to receive the award. And when I lifted the prize, I saw the entire hall clapping – including the Japanese Crown Prince Naruhito. It was such an emotional moment that I broke down.
6. CICCC & the Coronation Medal, 2008: Together with two of my friends, I organized the Citizens’ Initiative for Centenary & Coronation Celebrations despite a series of bureaucratic hurdles and a persistent badmouthing by people. But with the Coronation Medal conferred on three of us and as 56 days of music, laughter and celebrations closed on December 31, the National Geographic Channel interviewed me and asked me, "what remained on me of the whole experience," I replied, “Now I can die a happy man!” I really meant that.
7. In His Majesty’s Service, 2009: Being summoned to serve His Majesty directly is the greatest honor one could be bestowed as a Bhutanese. For a week, I went around like a zombie in total disbelief. Captain Sullenberger, the US Airways pilot who safely landed a damaged passenger jet on Hudson River with 159 passengers on board, told in one of his interviews that he thought that his “entire life up to that moment was a preparation for him to handle that moment.” I felt something similar. I wonder if my entire professional career, the shift toward journalism and the numerous international awards that actually went unrecognized in the country were all a “preparation” for this big assignment. I have now started believing in fate, destiny and hard work. The opportunity that His Majesty gives me to serve the people is perhaps what really makes my current assignment very fulfilling - because that is the most direct way possible. 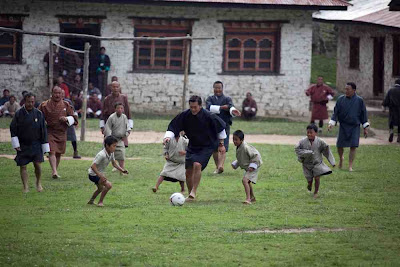 Posted by Dorji Wangchuk at 1:11 AM